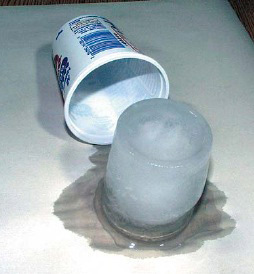 Students marveled at how a cup of water left outside overnight resulted in a block of ice the next morning. 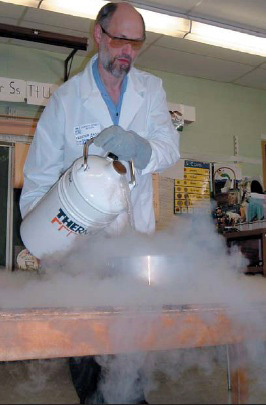 A visiting chemist followed up on their ice discoveries by freezing things, and making ice cream with liquid nitrogen. 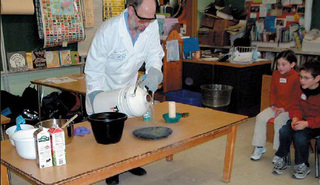 Watching the dramatic effects of liquid nitrogen from a safe distance

A Funny Thing Happened on the Way to the Test

I’ve been thinking about this question of how teachers can meet the challenge of raising standardized test scores while continuing to engage students with authentic, inquiry-based, hands-on learning. This question reminds me of how I first taught science ten years ago. We weren’t preoccupied with standards back then. When I was hired, I asked what I should teach and was told, “Reading, writing, math . . . you know, first grade.” I had no textbooks. All the other teachers kept monarch caterpillars in their classrooms, so I went out to a field and found some myself. I brought my class for walks in the local swamp to observe seasonal changes. In short, I did not have a standards-based science curriculum. I was clueless and winging it.

I used a lot of old yogurt cups in the classroom to pass out math manipulatives like beans and dice. One winter day Ana Mari filled up a yogurt cup with water and brought it out for recess. She forgot the cup on the stoop outside the classroom. Ana Mari found the cup the next day and discovered it no longer contained water but ice. When the children came in from recess, they crowded around her, jostling to see and touch the cup, like this was a miracle. I thought that was weird. I mean, by the time you’re six, you’ve seen ice cubes, and in Massachusetts, you’ve seen plenty of frozen puddles. I didn’t get the mystery.

Ana Mari asked me if she could share. I said sure. The audience could hardly contain its excitement. She rose with confidence, told the story of the yogurt cup being left out and then brought in. For her finale, she dumped the yogurt cup and gave it a dramatic whack. Voila! The wet round ice slid onto the rug, while the children all oohed and wowed. “How’d you make it do that?” Papo asked.

Ana Mari said, “I just left it on the step yesterday. I got this today!” More wows. This was like leaving your tooth under the pillow for the Tooth Fairy. I thought to myself could they not know that the cold temperature turned the water to ice? I was waiting for some smart aleck to contradict Ana Mari, but instead, Carmen asked if she could have a yogurt cup. I said sure. In the next minute, every other child asked too.

This went on for days. Every time I’d pick them up from recess, they’d be lined up, carrying these old yogurt cups in their mittened hands, asking if they could share. We put names on the cups, to reduce fighting, and began to keep a chart of our observations. We’d go around the circle and they’d all dump their cups on the rug. I started to spread newspaper on the rug before they came in. The first day that the water in the yogurt cup froze, it was sunny, clear and cold. The whole week was like that, until Friday, when it was cloudy and warmer. At the end of the week, I asked them what they thought was happening. The initial idea that some fairy was busily switching their water for ice was nixed because sometimes the dumped cups revealed a piece of ice and a splash of water. They began using the word “freeze” to describe the change.

The next hypothesis was that the sun was freezing the water. This hypothesis was bolstered by Friday’s evidence that the water was not frozen on the cloudy day. I was tempted to just tell them that water freezes at 32 degrees Fahrenheit and move on. Something told me not to rush it. Since I wasn’t required to teach about ice, I didn’t feel any pressure to “cover it.” The experiment continued for another week of soggy mittens and soaked rug. I put some thermometers out as bait. When I observed Paulo, a selective mute, covertly trying to break one, I pulled him aside and showed him how to use it. He watched me and said nothing. By the end of the second week, all of my first graders knew how to use thermometers and had figured out that it was the cold temperature that made their water freeze.

Connecting to the community

Gretel told the yogurt cup story to her mother, who knew a chemist who could make ice cream with liquid nitrogen. She invited him to visit our class. He wore a white lab coat, goggles, and very large safety gloves. He froze lettuce leaves and balloons. There was lots of fog tumbling off the table. I took photos; my students wrote captions for the photos to make a class book. Later, states of matter became part of the second-grade science curriculum. Gretel moved out of the district about a month after the chemist’s visit, but all these years later, he still comes to make ice cream with liquid nitrogen.

I recently talked to one of my former “yogurt cup experiment” students. She recalled her memories of first grade: hatching chicks, getting old shopping carts and tires out of the swamp, learning about the civil rights movement, and liquid nitrogen. “When I was in middle school, my science teacher asked us if we knew what liquid nitrogen was. No one else knew, but I raised my hand and told them I learned how to make ice cream with liquid nitrogen when I was in the first grade. I felt proud.”

I look back at the yogurt cup experiment with a mix of humility, satisfaction and amusement. Then I think about standards and testing. Today I am teaching science using a standards-based science kit on states of matter that my district purchased for about $500.00. The science curriculum committee recommended the kits over science textbooks, which “covered” a curriculum a mile wide and an inch deep.

At the end of one lesson, the children watched me fill an ice cube tray with water and predicted it would be full of ice cubes the next day if I put it in the freezer. In the next uninspired lesson, I gave each pair an ice cube in a Ziploc bag and we had an ice-cube-melting race. I followed the script. They completed the worksheet.

Will they remember this activity in fifth grade when they take their first standardized science test? Probably not. How about in tenth grade, when passing a high stakes standardized test in science and other subjects will determine whether or not they get a high school diploma? Definitely not. Will the standards-based science kit lesson turn them on to science? Suddenly the yogurt cup experiment doesn’t seem so silly.

I appreciate the guidance the standards provide in articulating the big ideas I should teach. I teach child-centered, inquiry-oriented science based on the standards but not because I think it will raise test scores. My teaching does no harm to test scores, but I don’t really care whether it boosts them. I am more impressed by a kid who shows empathy for a baby chick, or walks to school to reduce carbon emissions, or writes to the mayor to ask why an abandoned car lot can’t be made into a forest, than I am by a kid who scores at the advanced level. Ultimately, our society needs creative problem solvers, empathetic doctors, and ethical researchers.

So what do I do? I teach the required curriculum from the expensive science kit, but mostly I look for authentic connections. In a unit on simple machines, that means inviting in an old Puerto Rican locksmith who explains how keys are all about wedges. When a fist fight breaks out at recess about whether to save the trees or the tent caterpillars, we invite in a Buddhist scholar for a lesson on interdependence and email an entomologist in the Galapagos Islands with a list of questions like, “Would tent caterpillars be such a pest if humans didn’t cut down so many trees?” This year I began the unit on states of matter with a field trip to Snow Farm, home of the New England Crafts Program, where we met a glassblower and a welder and watched them transform their materials into whimsical chickens and colorful fish and birds. And yes, I still leave out yogurt cups and keep my eyes peeled for soggy mittens.

Black Ants and Buddhists: Thinking Critically and Teaching Differently in the Primary Grades
"One hell of a read."
–Linda Christensen, author of
Reading, Writing and Rising Up