Xochitl Calero (flower girl) with her moms, Effie and Jessie Molina, on their wedding day.

Gina and Heidi Nortonsmith with sons Quinn and Avery.

Last spring, my second graders gathered on the rug, discussing the impending 50th anniversary of the historic Brown vs. Board of Education decision. I asked how their lives would have been different without Brown.

"I wouldn't have all these friends... 'cause I wouldn't know them," said Sadie.*

Michelle raised her hand and said, "I wouldn't exist." Michelle is a biracial girl, with an African-American mother and white, Jewish father. Her mother Barbara had stayed for morning meeting that day, and she elaborated:

"Because of Brown, I was able to get a good education and went to a college that was integrated. That's where I met Michelle's dad. We fell in love and decided to get married."

Samuel, who is Panamanian and Pakistani, said, "My mom is brown and my step-dad is white, and they got married." He turned to ask Barbara, "In those days could a brown person and a white person get married?" Barbara said they got married in Massachusetts in 1985, and it wasn't a problem.

Angela, an African-American girl, had quietly been following the discussion and finally raised her hand. "Because of that [the Brown decision], things are more fair, like I can go to this school and have all different friends. Still, not everything is fair, and that makes me sad."

Sadie asked Angela what still wasn't fair. "Well, your parents could get married, because you have a mom and a dad, but I have two moms and they can't get married. That's not fair."

Sadie considered this for an instant before asking, "Who made that stupid rule?"

With the honesty and incisive thinking I cherish in second graders, Angela and Sadie had cut to the chase. When it comes to discussing gay marriage in second grade, these are the questions that matter most: Is it fair to exclude some families from the right to marry? Who made that rule (and how is it changing)?

I should pause here to say that I don't teach in Anytown, U.S.A. I teach in Northampton, a small city of 29,000 in western Massachusetts, which has been known as a haven for women and for lesbians. Northampton's status as a refuge from homophobia has been profiled in dozens of newspapers and media outlets around the country and around the world.

While the numbers vary from year to year, I have always had at least one child in my class with lesbian parents. This year, one third of my students have lesbian parents. While I probably have more lesbian-parented families than most teachers, the reality is that teachers may not know by looking if they have a child with gay or lesbian parents, aunts, uncles, grandparents, or family friends.

I teach at Jackson St. School (JSS), a public elementary school with about 400 students. Our school is a celebration of economic, racial, linguistic, and family diversity. Families speak a variety of home languages including Albanian, Spanish, Khmer, Vietnamese, Chinese, French, and Hindu. About 39 percent of the students are children of color, with the largest share of those being Puerto Rican. Forty percent of the students receive free or reduced lunch.

The school welcomes family involvement, with a weekly family newsletter and regular potluck dinners. It has a Family Center, which hosts a weekly Parents' Hour with coffee and conversation, as well as a family portrait project, in which a professional photographer takes free family portraits at Open House. These photos are displayed in the front hallway, heralding for all visitors the breadth of the school's diversity. Over the years, many parents have told me that even before speaking to anyone in the school, just looking at those family photos in the front lobby made them feel welcome, like they could fit in.

I began teaching at Jackson St. School eight years ago, fresh out of my teacher-preparation program. I decided to start the school year with home visits to my new students and their families. At one of the first homes I visited, a parent greeted me wearing a button that said, "We're here. We're gay. And we're on the PTA." Beth and Karen Bellavance-Grace began talking about being foster parents for the state Department of Social Services and being adoptive parents. As we began talking about family diversity issues, I asked if they would be willing to advise me on good books and teaching ideas. My education in teaching family diversity and learning from my families began on the first day of my teaching career, before I even set foot in my classroom.

When I speak to teachers and future teachers about gay and lesbian issues in elementary schools, they often ask how I can "get away with that." This is particularly ironic in Massachusetts, which was one of the first states to recognize the rights and needs of gay and lesbian youth in schools. In 1993, during the administration of Republican Gov. William Weld, the Massachusetts Governor's Commission on Gay and Lesbian Youth recommended that:


Despite that progressive policy, established under a Republican governor, teacher self-censorship, often based on the fear of raising potentially controversial topics, remains the status quo in many schools. Another problem, as progressive as the Weld commission's report was, is that it focused solutions primarily at the secondary level, with gay-straight alliances and so forth. Most people still get queasy talking about gay and lesbian issues at middle or—heaven forbid—elementary levels.

In my classroom, issues of family diversity often arise spontaneously. Once a group of my first-grade readers decided to act out The Carrot Seed, a simple story about a boy who plants a carrot seed and cares for it diligently, despite the discouragement of his brother, mother, and father. After the skit, all the other students wanted a chance to act it out too. I said we could do it once more before lunch. I began pulling sticks with student names at random from a cup, to assign the four roles. After I pulled the first three sticks, a boy had already claimed the part of the brother. One girl had taken the role of the mother and another girl had taken the role of the kid who plants the seed. The last stick I pulled was Natalie's, and the remaining role was for the father. A boy quickly said I should pull another stick. Natalie sprang to her feet without hesitation. "That's okay!" she said, "I'll be the other mom!"

Last May, same-sex marriage became legal in Massachusetts. Heidi and Gina Nortonsmith, parents of one of my students, had been plaintiffs in the Goodridge v. Mass. Department of Public Health landmark lawsuit that resulted in the legalization of same-sex marriage in our state. They were given the first place in line at Northampton's crowded City Hall on the morning of May 17 to get their marriage license.

After the court's decision, my students got "marriage fever." During "sharing time" Maggy reported on how she was the flower girl and her sister was the "ring barrier" at their friends' wedding. Avery Nortonsmith proudly showed the silver ID bracelet that he, his brother, and his moms all got on their wedding day, inscribed with the historic date. Sarah talked excitedly about preparations for her moms' wedding, how she and her sister and six of their girlfriends would be flower girls. I went to the wedding with my daughter and saw about half the families from my class. It was one of the most joyous and supportive celebrations I have ever witnessed.

My five-year-old daughter caught the fever too, and conducted wedding after wedding in her imaginary play. Each night she'd say, "Come on Mom and Dad, you're getting married tonight." "We got married eight years ago," my husband would remind her. Undeterred, my daughter would say, "No, that was your commitment ceremony, but this is gonna be your wedding."

Even snack time conversations raise the issue of gay marriage. Beth Bellavance-Grace, who now works as an aide at our school, told me about a kindergarten conversation she heard. A girl announced to her table, "I know who I'm gonna marry when I grow up. I'm gonna marry Ella."

"You can't marry a girl," a boy at her table replied.

"That was just in the olden days," she replied. "But now I can."

When we discuss family diversity, I define family as "the circle of people who love you." After I showed That's a Family one year, Marisol responded, "Yuck, that is so weird to have two dads!"

James turned to her and spoke with an air of sophistication. "What's the big deal about two dads?" he asked. "I got two dads. I got one in my house and one in the jail. Lots of kids gots two dads."

Marisol considered this a moment, then said, "Oh, I didn't think of that. I have two moms. I have my mom at home and a step-mom at my dad's house."

"See?" James said with a shrug of his shoulders. "I told you it's not so weird."

I had one student who was co-parented by three women. One morning we were having a math exhibition and the students had invited their parents. Thomas' three moms came in one at a time, each from their different jobs. James knew that his parents wouldn't be attending, but he kept looking to the door whenever another parent entered. He finally went over to Thomas and asked, "It be OK if I could borrow one of your moms?"

Bush's new secretary of education, Margaret Spellings, recently criticized PBS for producing Postcards from Buster, a children's show that included a family with lesbian parents. I wish Spellings could spend some time in my classroom. And I wish many Americans would approach the issue of same-sex marriage with the same openness as my second graders. As we draw near to the first anniversary of legalized same-sex marriage in Massachusetts, the national battle over marriage rights is just heating up.

The refusal to extend equal rights to families with gay and lesbian parents hurts children like my students, giving them the message their families are not equal, are somehow inferior. And, as my second graders will tell you: That's not fair.

Families With Power: Centering Students by Engaging with Families and Community 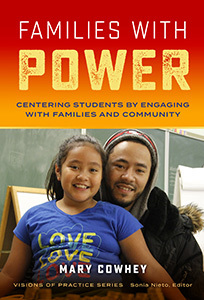 "Families With Power is the most inspired and significant book on family involvement in education that I've encountered in my long career." Sonia Nieto, professor emerita, University of Massachusetts, Amherst

Black Ants and Buddhists: Thinking Critically and Teaching Differently in the Primary Grades 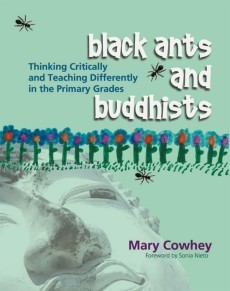 –Linda Christensen, author of
Reading, Writing and Rising Up 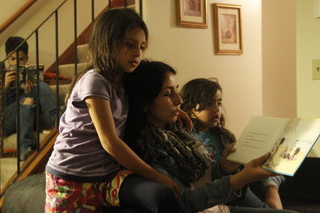 Families With Power is a grassroots organization of low income families, dedicated to developing youth and caregiver leadership, supporting one another and helping our children succeed.